Life right now is all about watching the giant magnolia tree over our chicken run slowly unfold its blossoms.

Life right now is also a forecast of cold and (though I refuse to accept it) snow that might put an end to these pink petals over the weekend. In other words, life right now is beautiful and hard.

Life right now is discovering that a few of the rafters in our roof were resting on air, the original chestnut beam having rotted away long ago. But life right now is also our new friend, Dr. B. (“Doctor of Old Houses”), who promptly left his scaffolding, drove over to his own old house, and picked up a replacement chestnut beam he had handy.

Right now, I am reading books by the bow-window in my bedroom and watering seedlings that sit beneath grow lights in the basement.

I am loving Four Seasons in Rome by Anthony Doerr. While at work on the novel that would become the Pulitzer Prize-winning All the Light We Cannot See (yes, he’s that Anthony Doerr), Doerr was the recipient of an award to live and write for a year in Rome. He found out about the award the day his twin sons were born.

Writers begin as observers, and Doerr models this beautifully. This is a memoir of Rome, of parenthood (and insomnia), and the writer’s craft. It is also a book that gives me hope. As readers, we know that during the period Doerr writes about he is engaged in a creative effort that will succeed beyond anything he can imagine. And yet, Doerr struggles with insecurity, doubt, writer’s block, culture shock, and the exhaustion of parenting infant twins.

For all of us, life can feel impossibly difficult, but this book reminds me that no matter how each individual day feels, our days are adding up to something beautiful and meaningful.

I also recently finished Addie Zierman’s new memoir Night Driving: A Story of Faith in the Dark. On the surface, this is a memoir about one mom’s rather desperate road trip escape from Minnesota’s winter toward the beckoning sunshine of Florida’s beaches.

Zierman brings her two young sons along for what turns out to be more of a search for the light of God’s presence than southern sunshine. The faith of her young adulthood was fiery and intense, but that kind of faith flickered and dimmed long ago. Zierman hits the road in search of a God who often seems hidden and silent. Whether or not you relate to Zierman’s phase of life or the trajectory of her spiritual journey, I recommend this book. Zierman is a gifted writer, and this memoir is incredibly well crafted. Once I picked it up, I couldn’t put it down.

I recently shared my writing in a few new places around the web.

First, I wrote On Tears (And Other Blessings) for my friend and fellow writer, Sara Hagerty. I have given Sara’s first book Every Bitter Thing Is Sweet to more than a few friends (and sisters).

Second, I shared some family stories in a piece on love and grief for my friend, Mary Bonner. The day I sent this reflection via email turned out to be the day Mary’s mother’s health suddenly declined. She didn’t read my words until she’d returned from her mother’s funeral almost two weeks later. By then, the words I wrote were for her, but perhaps they are for you, as well.

The first Roots and Sky online book club continues! Laura Brown is leading a thoughtful discussion, and you can even find recordings (two so far) of me reading chapters from the book. Here are week one (thresholds), week two (testimony), and week three (winter).

“Without habit, the beauty of the world would overwhelm us. We’d pass out every time we saw – actually saw – a flower. Imagine if we only got to see a cumulonimbus cloud or Cassiopeia or a snowfall once a century: there’d be pandemonium in the streets.” – Anthony Doerr, Four Seasons in Rome

This Is How Dreams Come True

I grew up in Texas. In that place, it is possible to be surprised by spring. A river of bluebonnets might bubble up overnight. A heatwave might suddenly stake its claim on a handful of early February days.

Here, among rolling Pennsylvania hills, spring is never a surprise.

We wait so long for spring, and its coming is so slow, that no change appears without being watched from a great distance and for a long while. The view from my office window today is as brown and bleak as ever, but for days, weeks, even, I have watched the buds on the forsythia swell.

The snowdrops in the lawn do tend to pop up without warning, but no sooner have I noticed them than my two-year-old daughter has flattened the whole patch with one pink, rubber boot.

Observing a northern spring, I realize how small a great, new beginning can be. I dream of spring all winter, but the dream comes true only in fits and starts. In much waiting and a great deal of work with shovels, rakes, and pruners. 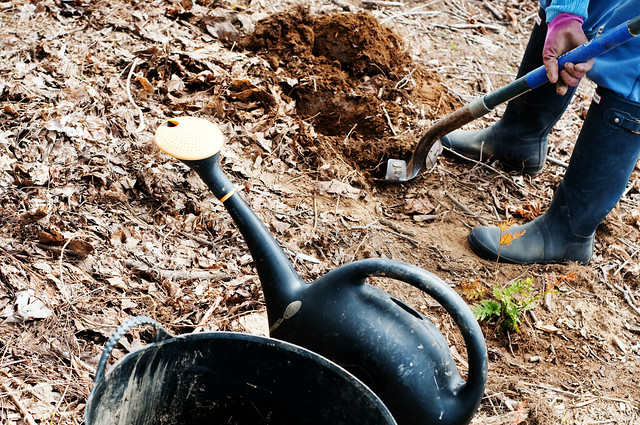 I once dreamed of becoming a mother, but the dream was realized in sleepless nights and temper tantrums (hers and mine).

I once dreamed of a farmhouse home, and the dream came true as we cleared hornet nests from behind every window shutter and poison ivy from every fence and tree.

I once dreamed of becoming a writer, and that dream came true through the slow, daily accumulation of words. 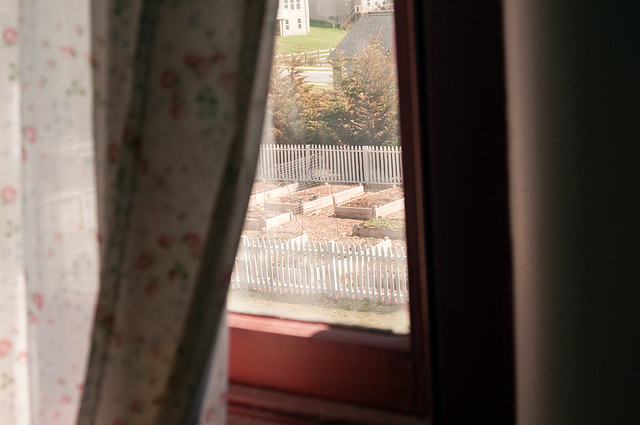 There will always be some moment of joyful recognition. Some moment when the dream drifts down around you. Light, like dandelion fluff, but real enough to see and touch.

Perhaps when the baby says I love you. When a friend says your home is so peaceful. Or, maybe, when you read the proposed back-cover copy for your book and burst into tears. Because, for the first time, the book with your name on it sounds, even to you, like a good book. Like the kind of book you would love.

I have lived enough springs to know that I will always greet that moment with astonishment. 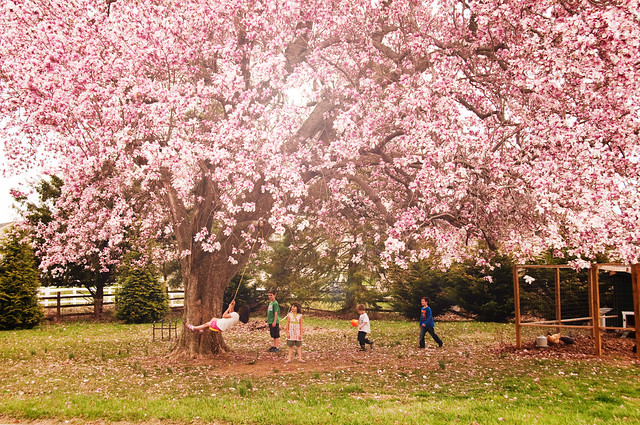 The Season of Singing Has Come

Spring has finally come to Maplehurst, and we are living in a watercolor world. Trees are smudged with the almost-neon green of new buds. The ground is blurred by the purple and white of wild violets. Move your head too quickly, and the brilliant yellow of the dandelions might just look like a lightning strike.

For several days, I have noticed a spot of garish orangey-red near the laundry room steps. I assumed it was a child’s toy. Something awful and plastic. Today, I realized it was a patch of tulips striped orange and yellow. They have large, black polka-dots in their middles. They are the tackiest flowers I have ever seen, more like circus clowns than plants. These tulips, bursting out near the propane tank, prove spring does, in fact, have a sense of humor.

I was twenty-one before I witnessed a real spring, the kind that only comes after a long, cold winter. We were living near Washington D.C.. I had never seen redbuds and forsythia, cherry blossoms and tulips. And the dogwoods. Oh, the dogwoods.

On a walk to see the cherry blossoms near the Jefferson Memorial that spring, I noticed a spectacular flowering tree. It looked as if a hundred thousand delicate, pink-winged birds had come to rest on its branches. I took a closer look at the flowers, and I knew they resembled magnolia blooms.

I may not have paid much attention to Texas flora beyond the justifiably famous bluebonnets, but I, like any southern girl, knew that magnolias never lost their dark, glossy green leaves. I also knew that magnolia blooms are pure white, as big (or bigger) than a baby’s head, and they merely dot the tree, like ornaments placed just so.

In other words, this brilliant pink explosion of a tree could not be a magnolia.

After two years in Virginia, it was time to choose a graduate school. I took one look at the blooming pink magnolias lined up against the gothic grey of quadrangle walls and knew I’d be moving to Chicago.

After Chicago, I lived for two years in a Florida house with an evergreen magnolia centered proudly in the front yard. It was lovely, yes, but it reminded me that I was living in an eddy. My life had turned backwards and sideways. For two years, I had no spring.

Nine months ago, we moved to Pennsylvania, to this Victorian farmhouse called Maplehurst. I knew the old tree planted north of our front porch (a tree that must be as old as the house itself) was a magnolia. A deciduous magnolia. The largest I have ever seen.

And I’ve been waiting.

Waiting for God to keep his promises, waiting for life to get a little easier, waiting for spring – spring like we haven’t seen for three years – to come.

This was waiting as it is meant to be. Waiting with hope. Waiting with full expectation. This, not because I’ve finally mastered the spiritual discipline of waiting, but only because I have lived through a few winters, and I have seen them all end.

I have been waiting with eyes wide open because I could see the tree always outside my window. I knew what it had in store for me because I’ve seen it before.

But never this big.

“Flowers appear on the earth; the season of singing has come.”