The two of us. Pre-digital camera. Pre-parenthood. (Just barely) pre-9/11.

I still have the airfare ticket stub marked September 11, 2001.   Ten years ago, we didn’t use e-tickets.

Also, there were no smartphones.  This partially explains why it isn’t the images of destruction that have stuck with me (images we didn’t get a good look at for nearly a week).  It’s the voice of our pilot.

We had just begun our flight from Shannon airport in the west of Ireland home to Chicago, when a deadly-serious voice sounded over the speakers: “Something terrible has happened,” it said.  “The FAA has closed all airspace, and we will not be continuing this flight.”

Our plane was grounded in Dublin, a city we hadn’t planned to visit during this, our first, trip to Ireland.  Jonathan and I didn’t say anything while we sat on that plane waiting to disembark and collect our luggage packed with dirty laundry.  We only looked at each other.  Later, we discovered that the image in our minds had been the same: mushroom cloud.

Somehow the actual story was harder to believe.  An Irishman with a working cellphone began hearing stories, and they spread quickly from row to row.  Attacks?  On New York City?  Washington D.C.?  We shook our heads, said we didn’t believe it.

A few hours later, the airport employee helping me find accommodations in Dublin said it was like something out of a disaster movie.  That’s when I understood.

Jonathan left me with the luggage and went searching for a television.  He found one at the airport pub.  Walking back in my direction, he looked stunned.

I could only pray, “Lord, have mercy.”

For a week, we wandered around the city, feeling as if we might never get home.  We guarded our torn ticket stubs as if they were a king’s ransom.  We saw confused looks every time we handed them over to another ticketing agent.  It was hard for them to understand that when the towers fell we’d been caught in mid-air.

Some small, rational part of our brains kept repeating that if only we knew when we’d be going home we could enjoy this unexpected vacation in Dublin.  But we were counting pennies, dodging raindrops, and washing a suitcase full of clothes at the laundromat.  It didn’t feel like vacation.

While on vacation we had spent our carefully saved dollars on bed and breakfasts that served Irish porridge with just-picked blackberries.  In Dublin, we had a small lumpy bed and were served canned beans on toast.  Want to make an American feel wretchedly homesick?  Just serve her instant coffee and canned beans on toast.

The world had shifted on its axis, we understood that unimaginable evil could rear its head at any time and in any place, but we couldn’t comfort ourselves with the well-loved and familiar.  The flags at half-staff were Irish ones.

After several days in Dublin, we were promised a flight home, but we would need to get back to Shannon airport.  We said goodbye to the lumpy bed and took an all-day bus that brought us back across the country, to the place where we had started.

When international airspace reopened, we were there, again, at Shannon airport.  They had no record of our names, and we had only our tattered ticket stubs.

We spent one night in the home of a family preparing for their daughter’s wedding.  Two stranded German tourists were across the hall from us.  The wife said not to worry, we were no bother at all, and she cooked us a big fried breakfast.  The husband drove us back to the airport for another try.

At the airport again, we sat on the floor and listened as Aer Lingus employees filled up a plane to Chicago with names called out one by one.  When there was exactly one seat left, they called my name.  I said that I wouldn’t get on any plane without my husband.

We were wondering whether we could interrupt the wedding weekend with one more night’s stay, when a woman in an official green uniform came running up and shouting, “Does anyone want to go to Baltimore?”  We raised our hands.  Then, following our guide, we ran.

We also prayed, “God let the doors still be open.”

We weren’t headed home, but it was close enough.

We remembered a friend who lived near D.C.  Jonathan, miraculously, remembered his phone number.  He picked us up, drove us to his own home, gave us a beautiful, not-at-all lumpy bed.

We managed to find a tiny, out-of-the-way rental car business with one car still on its lot.  We took it.  Twelve hours later, and one week after 9/11, we slept in our own bed.

“God is our refuge and strength,

an ever-present help in trouble.

Therefore we will not fear, though the earth give way

and the mountains fall into the heart of the sea,

though its waters roar and foam

and the mountains quake with their surging.

There is a river whose streams make glad the city of God,

The holy place where the most High dwells.”

On Boredom (Or, What I Did on My Summer Vacation) 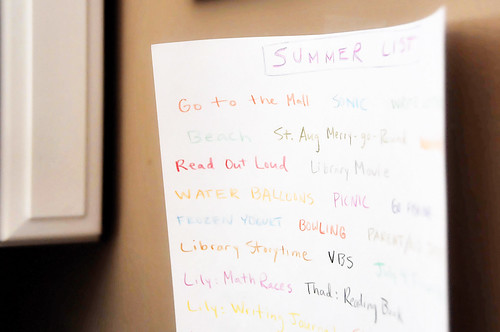 Our Summer List is nearly illegible.  Most of the items are crossed through.  I might have drawn a neat pencil line through each activity (trying to check it off but not erase it).  My young daughter, who has not yet learned to grasp desperately at passing time, obliterated most of the list with a thick, black marker.

On the record, I’d say that our list helped shape an enjoyable summer.  Though, the perfectionist zeal of my first-born did lead to a difficult argument on one of the final days of summer vacation.  No, I had to tell her, we cannot visit the carousel, go on a picnic, keep a writing journal, and make playdough all in a single day just because they are still on the list.  The compromise was a half-hour drive to the carousel.  And a few more memories for our piggy banks.

The Summer List did not completely silence the eternal summer cries of “Mom, I’m bored!”  Nor should it have.

I tend to think that boredom is good for children, like green beans and sharing a bedroom.  I tell them as much, though they remain unconvinced.

I thought I believed my own preaching, but I began to doubt that over the summer.  I too have been bored.  Very bored.  I discovered that, for me at least, green beans and sharing a bedroom are much, much better than being bored.

Of course, boredom is a privilege.  If I had to walk miles in fear to collect water for my family, I would not be bored.

I wonder, is boredom merely a lesser evil, or might it have some good to offer?

To be bored is to be unhurried.

When my toddler throws a screaming fit, I let him scream.  But, I also sit down close by because nothing else is screaming for my attention.  When he’s ready to climb into my lap, I’m right there.

To be bored is to be waiting.

I have been thinking (and, let’s face it, hoping) that boredom might be one of the final stages of resting.  When we first rest from work, we are content to simply be.  After a while, our minds, our hearts, our bodies are ready, once again, to do.

To be bored is to be listening.

God is always talking.  Sometimes He has a lot to say, and He says it in some big way, but, more often, He is whispering.  When I am bored out of my mind, my ears are searching for any sound from Him, so eager am I to hear the extraordinary break into my ordinary.

Greetings from the Land of Waterfalls, Glitter, and Unicorns

(photo by yours truly)

Okay, maybe not that last one.  But, really, it wouldn’t at all surprise me to see a unicorn drinking from one of these dappled mountain streams.

We’re enjoying a family vacation this week.  The air is blessedly cool.  The pools and streams are icy, and when my children come out after swimming they look as if they’ve been dipped in gold glitter.  My husband, who will always carry with him the rock-collecting Boy Scout he once was, could tell you why.  Mica?  Quartz?  I don’t know, but it’s lovely.

I’ll be back in this space next week.  I’m just popping in briefly tonight to say thank you.  I’ve enjoyed one full week in my beautiful new online home, and I am feeling very grateful for the super-smart design wizards who have made this possible.  Thank you, Adam, and everyone else at McLane Creative.  Tech-y, computer stuff seems like rocket science to me and just thinking about it makes me bite my nails, but you made this process entirely painless . . . actually, better than that: it was enjoyable!

If anyone reading this needs help with web design and development, someone to help you take that “next step” online, may I recommend my new friends at McLane Creative?  They are the web design equivalent of a mountain vacation (waterfalls, glitter, and unicorns included).