I wrote this Advent reflection two years ago. My daughter is twelve now, but she still asks difficult questions. I still have no easy answers.

When I began writing these Advent reflections, I had a very general structure in mind. The whole series would move, I thought, from dark to light, from ordinary to extraordinary, from dust and dirt to starlight.

Instead, I have consulted this writing plan each morning and discovered my own emptiness. No words. No stories. No ideas. Which is a desperate place and a very good place to find oneself. It has led me to frantic prayer and constant listening. Finding no stories in the plan, I have listened hard for any hint of story in my day.

Often, I have found my stories in my daughter’s difficult observations. 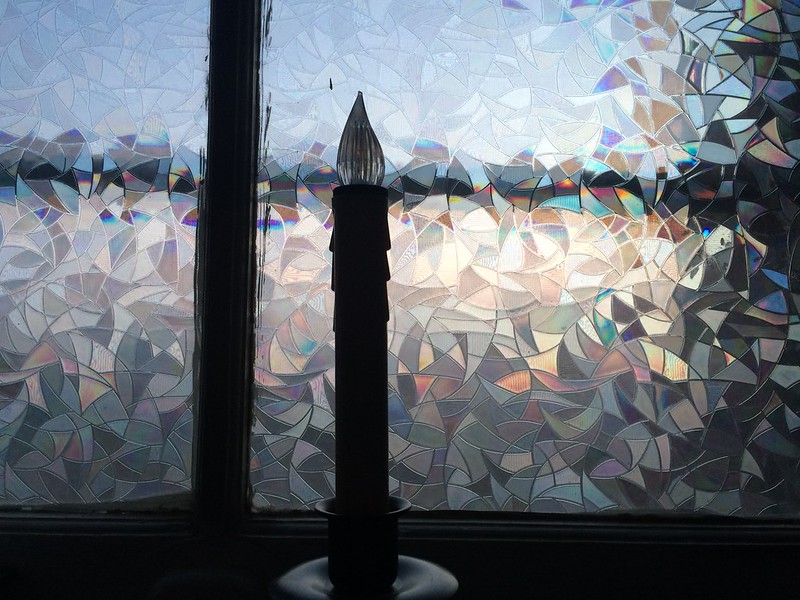 Yesterday, she said, “I think it must be the worst thing in the world to have a child who dies.”

I fight the pull of the pretty, easy answer and say nothing but “Yes, yes, I know.”

She is only ten, but she already understands love’s terrible shadow. She knows intuitively, without ever being taught, that great love rips us open. Leaves us wounded and bleeding.

I have no good answers for these kinds of questions. I have no band-aid for this degree of pain. Today, I do not even have much of a story. Sometimes, the world looks darker and more ordinary the closer we get to Christmas. Sometimes, there is no perfect, timely trajectory from Advent waiting to Christmas fulfillment.

But if I have no story, I do have this one thing to share with you. A vision of sorts.

After our conversation, I kept seeing a picture in my mind. It was my daughter, so full of difficult questions and a grief too old for her years, and she was wearing the angel costume we once found at a thrift store. It is white and shimmery, and the padded, embroidered wings are gold.

I kept seeing her sad eyes against the white glow of the angel’s dress, and I realized, I think for the first time, how much our Christmas gift was heaven’s loss.

I realized how vast an emptiness the Prince of Heaven left behind him when he poured himself into Mary’s womb.

I looked into angel eyes, and they seemed to say, “We have lost him. We have said goodbye. How long till he returns to us?”

I can’t erase love’s dark shadow, and I’m not sure I would if I could. But I know that the parent heart of God has known it all already. He has passed by a heavenly chamber and found it empty. Heart-breakingly empty. And I know he suffered that pain for love.

This is the comfort of believing God sees our emptiness, our pain and says, “Yes, yes, I know.”

Seeking and Finding through Lent

Our dinner-table conversations with the kids seem to pivot between the ridiculous and the ultra serious. There is no in-between. Either, there are jokes about Thomas the Train crossing the road or there are existential complaints about prayer.

Why do you say we should listen to God when I can’t hear him? even the four-year-old wants to know.

I Don’t Know what His voice sounds like! another child chimes in.

In all honesty, even our serious conversations collapse toward the ridiculous until I, utterly exasperated, announce:

“Let those who have ears to hear, hear! Now clear the table.”

Snow is falling again. The world outside my window is dusted in silence, but I am listening. I am waiting for the wind to “shake a thousand whispers from the yew,” as T.S. Eliot writes in “Ash Wednesday.” Specifically, I want to hear a whisper about Lent. It is nearly here, and I don’t yet know how to set the time apart.

I still believe in sacred time, though I live in a world of Sunday-morning swim meets and Sunday-afternoon birthday parties. I know that, without some effort on my part, all time looks the same whether or not it is the same.

And yet, every year I seem to arrive at Ash Wednesday utterly emptied. Without even the energy to give up chocolate or add in more prayer or commit to some act of service. Whereas Advent fills me to overflowing with words and ideas and inspiration (so much so that I have blogged every day of Advent for three years running), Lent finds me spent. Dry.

Lent finds me listening to silence, desperately hoping that silence has something to say. That it isn’t the absence it sometimes seems to be.

When I picture that forehead smudge of ash, I hear the words of one of our oldest Christian hymns: “Let all mortal flesh keep silence.” I am dust and dust I will be again, and there seems nothing else to say. I will keep silence.

But I am a reader and a writer, and what it means to keep silence is complicated. Perhaps, it is always complicated, for each of us.

Silence might be the fruit of humility, but I can remember using it as a weapon. When I was a girl with two younger sisters I wielded my ability to hold my tongue like a sword. I may have been just as responsible for the argument, but if I whispered while she yelled, I would appear innocent when our parents doled out punishment. I was the evil queen of silence.

I seek an invisible God, and I must not forget that. Of course, there is little danger of this thanks to my small dinner companions. Even the four-year-old cries Why can’t I SEE Him? Why can’t I HEAR Him?

Why, indeed, dear one.

To remember his invisibility and his silence is not to keep him at a distance. Far from it. It is the reminder I need to look hardest from the corner of my eye. To observe closely the spaces between those things right in front of my face.

He hides, but he hides in plain sight.

He is silent, but He is the Word.

This is what I want my children to know: Believe that He can be found, and you will find Him.

But I think it will turn out fine. The trick, I am learning, is to focus on the spaces between. The gaps. The pauses. The moments that leak silence.

Ash Wednesday is the first rupture, the first crack in the usual order of things, and I will welcome it. I may have no plan. I may have no energy to implement even the plan I do not have. But these forty days are set apart.