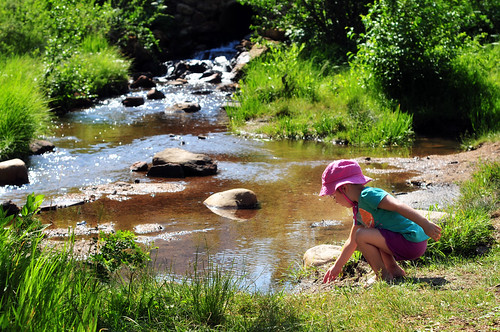 This dream is big, and we’ve dreamed it for so long. Maybe that’s why I imagined fireworks. Cymbals crashing. An arrival announced with lightning bolts.

But even big dreams are realized in little ways. A morning. An evening. Another morning. It seems that trust and faith are still necessary even after the dream’s inauguration.

Our first Sunday is also the day for the church’s once-a-month family picnic. We hesitate. Potlucks are danger zones for our middle child. But, they’re grilling packaged meat, and we can check the label. There are big slices of watermelon. So we stay.

And it’s beautiful, this place. A playground shaded by trees. Meadow grasses leading down a wide hill. There’s a small, bubbling creek. A fishing net and a bench just to the side. The kids wade and play and can’t believe their luck. This is church?

The man across the picnic table tells me about this place. Native Americans long used this hillside for their winter rests. Returning from summers spent on the plains, they came to this spot. They took a break from their wandering, and they took that break here. By this water.

The creek, he tells me, is no ordinary creek. You can’t see it, but there is a river here.

The creek that bubbles up just below our table is the beginning – the very small beginning – of a big river. A few miles away this water holds barges, he says. But it all starts here. This is its beginning.

Later that same day I read these words: “Do not despise these small beginnings, for the Lord rejoices to see the work begin” (Zechariah 4:10).

I haven’t felt like rejoicing. Too tired. Too hot. Too pregnant. Too much to do. But, I know now that our dream has begun. It has taken shape. Made us tired with the work of realizing it. And that is very, very good.

It is the end of the first day, and we sit on the porch. No chairs, yet. Just us, here, on the steps.

There is a full moon high in the sky, and it is God’s joy for us.

Because the work has begun. 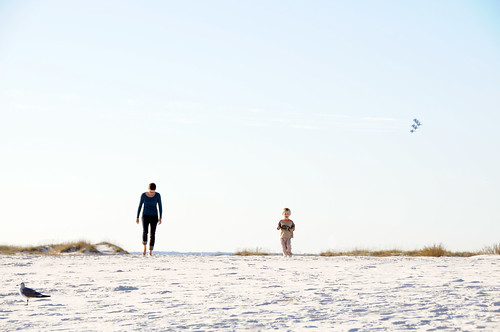 What, Then, is Prayer? 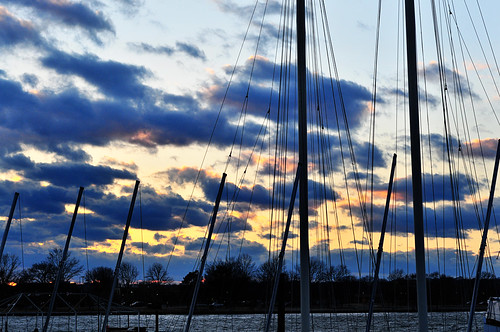 I fear that too many of us approach prayer with a mental picture of ourselves making a laborious attempt to come before God.  Or, maybe we have a picture of ourselves trying and mostly failing to get God’s attention.  Either way, the effort is all ours.  The distance between heaven and earth appears too big to bridge, and our burdens seem trivial.  They are dwarfed by God’s vastness, and they are lost in the cacophony of prayers being made across the planet at any given moment.

I’ve learned that prayer is not about little people waving their puny arms in God’s face.  Nor is prayer like my own small voice pushing aside all others in order to make its way into God’s ear.

Rather, prayer is like a river.  It is always flowing, and we are not its source.  Its source is the Christ “who was raised to life,” for we know that He “is at the right hand of God . . . interceding for us” (Romans 8:34).

To pray is to step into the rushing water.

Even the words we say are not our own.  We pray, like Christ, “Abba, Father.”  Instead of distance there is the intimacy of family.

And when we have no words?  We groan, but even in this we are not alone.  Our groan joins that of creation (and who can doubt that creation groans?).  Even better, our groans are echoed in God’s own heart, for the Spirit “intercedes for us with groans that words cannot express” (Romans 8:26).  Our pain, our uncertainty transformed by God himself into powerful, purposeful prayer.

Quieting myself, I can just hear the sound of the river.  It is the sound of One singing over us, and His voice “is like the sound of rushing waters” (Zephaniah 3:17, Revelation 1:15).

How do we find this river?  How do we hear its voice?  And, most importantly, how do we jump in?

I’m not sure that I’ve figured it out.  All I know with certainty is that the river is there and sometimes it finds its way to me.

This week it found many of us at a monthly women’s worship service focused on the arts.  Women sang, women danced, women spoke, and women painted.  Yes, painted.

By the end of the service, the canvas I had chosen (or the canvas chosen for me?) was covered in a wild rush of water.  The artist’s brush had spelled out across it: “The Healing River Flows.”

How could I ever think that my prayer for healing is mine alone?  Or even that I am its source?

The source of my prayer is Christ.  The same one who gave me these words when I first prayed for a child: “There is a river whose streams make glad the city of God” (Psalm 46:4).  Back then, I read those words and knew that my prayer had been answered.

Now I know that “answered” is not really the best word-picture for what sometimes happens when we pray.  Instead, it is less like being spoken to and more like being swept away by water that was always already pushing in the direction we longed to go.

We don’t need to fight to get God’s attention.  We do need to remember that our Savior with the voice like water has never stopped praying over us.

“Then the angel showed me the river of the water of life, as clear as crystal, flowing from the throne of God and of the Lamb . . .” (Revelation 22:1).