Here is one last peak at my bookshelves before summer.

I think one of these might be just the thing for that afternoon in the hammock, the long car trip, those sweaty hours between events at the swim meet.

I plan to read as much as possible these next few months. I’m imagining quiet afternoons with a sleeping baby and three kids with noses-in-books, but the reality is more likely to be me on my green sofa, one eye on the so-close-to-crawling baby and one on my book, while I try desperately to tune out the shrieks of three children running circles around the room. Yes, I’m trying to be realistic.

Either way, my plan is to bring These Farmhouse Bookshelves back in September with fresh recommendations. 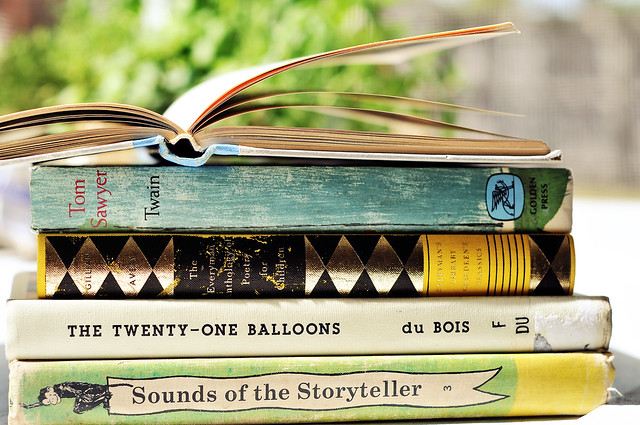 One of my favorite writers (she is a master of the revelatory interior monologue) has a new book. Kate Atkinson’s Life After Life: A Novel

is the best thing I’ve read in a long time.

I was skeptical at first. Perhaps you remember my distaste for literary gimmicks? Atkinson’s latest is structured around a stunning gimmick, but this excellent novel doesn’t deserve that pejorative term.

The book’s heroine is Ursula Todd, an Englishwoman who lives (and dies) through the Great War, the Spanish Flu epidemic, World War II and the London Blitz, and all of the upheaval of early twentieth-century European history. She lives, and she dies, and then she is born again, always and, it seems, forever on the same snowy night in 1910.

That is the novel’s literary device, and though it seems to break so many rules (most importantly, the reader’s assumption that the very worst thing cannot befall a novel’s primary character), Atkinson uses it to brilliant effect.

Ursula’s many lives and deaths, and the fascinating ways in which her story changes or does not, add up to a compulsively readable novel (after moving slowly through the first third, I couldn’t put it down) and one that gives us so much to think about: from questions of history and personal fate to the God-like role of novelists themselves.

Life After Life is the coming-of-age novel writ large. Ursula is given chance after chance to live well. We are given only one. We can learn a great deal from a character who knows the depths of the adage that “practice makes perfect.” The important question is, in that tumultuous time and now, what constitutes a well-lived life? What does “perfect” really look like?

Sylvie’s knowledge … was random yet far-ranging, ‘The sign that one has acquired one’s learning from reading novels rather than an education …’

A Time to Keep: The Tasha Tudor Book of Holidays

may be the best children’s book I never read as a child. I love it so much, I feel as if I have lived in its pages the way only a young child can.

Featuring Tudor’s beloved illustrations, this picture book shows us twelve months of celebration in a rural, New England family about a hundred years ago. Based on Tudor’s childhood memories, we have beautiful pictures and brief descriptions of a bonfire on New Year’s Eve, a syrup-making party in March, a dance around the Maypole, and a very special August birthday, to name just a few.

This is a book about the special rhythms of the seasons and of family life. It is sweetly nostalgic and inspiring. Enthralled by the book’s August birthday party, my daughter and I have decided that someday, somehow, we will float a candlelit birthday cake down a stream at twilight.

August brought your mother’s birthday which we celebrated at night by the river. The table was set with birch bark plates and gourd drinking cups.

I pulled this last book off my shelf last night and promised myself I’d reread it over the summer. Even the summer months deserve something of high literary value, but I find that short stories are easier to squeeze in between visits to the pool, park, and farmer’s market.

The Springs of Affection: Stories of Dublin

is a collection of realist short stories by one of The New Yorker’s most gifted writers, Maeve Brennan. Out of print for decades, these stories were republished four years after Brennan’s death in 1993.

Born in Ireland, Brennan lived in New York from the age of 17, but the stories are each set in Dublin. These are stories about family and affection as well as the uglier emotions which can mar those relationships: emotions like grief, envy and even hatred.

These are stories in which each detail of a character’s dress and environment matters. They suggest that a writer’s primary task is observation. Writers, especially, appreciate Brennan’s work, but I think she has something to teach all of us. Whether we write or not, our lives are enriched when we pay close attention. To the arrangement of dishes on our kitchen shelf. To the face of a friend or child.

… you would think, looking at such an arrangement, that the boxes contained something of interest or of value. And what did they contain? Old bills marked paid thirty years before. Recipes for dinner she had never cooked, dinners so elaborate that she must have been dreaming of a vist from the king and queen of England when she cut the menus out of the magazines in which she had found them.

What do you plan to read this summer?