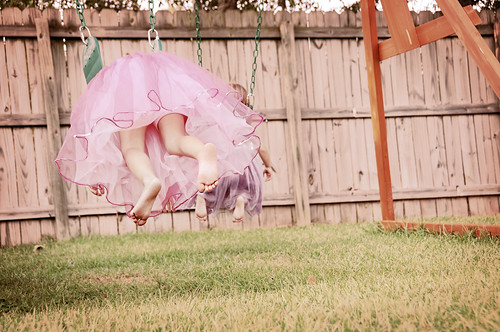 Fairies flying in my sister's yard.

Monday night witnessed our first visit from the Candy Fairy. For parents of highly allergic and/or cavity prone children (and I have one of each), she is a Very Good Thing. After the trick-or-treating, after the just-one-more-piece before bedtime binging, she empties the still-brimming candy buckets and drops a small toy into the plastic orange void.

For the firstborn: rosebud earrings and a Pippi Longstocking book. For the middle child: a Lego alien “blaster” (The language of a five-year-old boy is amazingly onomatopoeic). For the baby: a red Thomas the Train engine with an unpronounceable name stamped on his side.

This largesse came fast on the heels of another nighttime visitor: the Pacifier Fairy. When Jonathan noticed the baby’s teeth looking more than a little misshapen we took quick action (assuming, rightly I think, that delay would be deadly for our resolve). The baby was sweet-talked into stuffing the mailbox with much-loved pacis, and the Pacifier Fairy soon whisked them away, leaving a blue Thomas the Train engine behind.

Add in Tooth Fairy, Santa Clause, and Easter Bunny, and our home is a busy intersection in the fairy/magical creature highway.

Since she was first old enough to string words into sentences, my daughter has asked me, “Mom, do you believe in fairies?” And I always say the same thing, “Well, I’ve never seen one, but that doesn’t mean they don’t exist.” (And for the rational-minded among you, shuddering at my deceit, all I can say is how often have scientists discovered bizarre new species in ocean trenches or volcano tops, creatures more surprising than any fairy?)

I tend to think that belief (in anything unseen) is a subtle orientation towards the world. It’s a just slightly off-kilter way of looking around oneself. A way of seeing that goes beyond the physical perception of your eyes. To believe, is to be always ready to say, “Perhaps, there’s more (rather than less) than meets the eye.”

And so, I’ve introduced my children to more. Fairy rings and tomtens. Santa Clause and mermaids.

I don’t share this under the category “advice for parents.” Perhaps, you’ve heard me mention before that I believe in the sharing of stories but not the sharing of advice?

I’m sure any number of you could put together a highly convincing, highly reasonable argument for why I am wrong. Honestly, I’m already half-convinced, and we will probably be telling the firstborn the truth about Santa Clause this year (the truth: Santa Clause is a magical story that you now get to help tell for your little brothers).

But here is what I cannot do: I cannot give my children lists of beings worthy of belief (Jesus, the angels) without demonstrating for them a capacity for belief. I want them to see in me a willingness to be surprised, to be proved wrong. I want them to know that the world God made is always more beautiful, more startling, more good than what we previously knew.

This world is full of magic. It’s evident in science textbooks and in fairytales.

I believe that the great magician behind it all has revealed himself to us in the figure of a man. This man walked the same solid ground that we do. In him, story and history intersect. Magic and flesh-and-blood-reality are joined.

He is the good news, too good to be true.