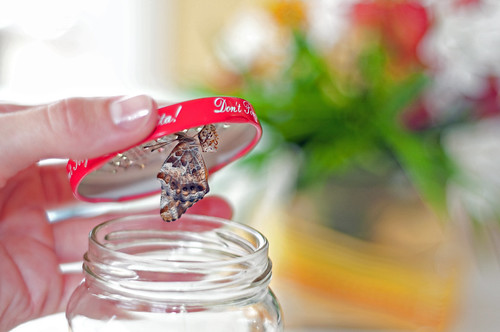 Yesterday was all about the space shuttle in our house.  The littlest boy jumped up and down when he saw the rocket poised for takeoff on television.  The older boy zoomed around the house with his own plastic space shuttle.  The husband kept his eyes glued to the live feed from NASA.

The daughter and I watched them for a bit and then decided it was a good morning to replenish the refrigerator with a visit to Costco.

Later, as I carried warehouse shopping odds and ends from the car to the kitchen, I could hear from the television and the three boys on the couch that the shuttle was finally beginning its journey. I walked outside for another load and spied the southern stretch of sky where we've watched other shuttles speed away, chased by their fiery tails.  Because of the low-lying clouds, we could only watch this historic takeoff on television.  The husband and I are both glad that he took the time, months ago, to drive our two oldest down to a beach where they could feel the rumble of space flight deep in their bones.

Perhaps it was the tantalizing thought of "right there but unseen" that prompted my thoughts.  I knew exactly where the shuttle's flight path arced over my neighborhood, but I couldn't see it.  I wondered if God was watching.  What did he think of it all?

I imagined his delight as his tiny yet magnificent creatures explored a little patch of space.

I've always given space exploration little value, both with my political self (I'd rather see tax dollars spent on teachers and healthcare) or my spiritual one (shouldn't more of that innovation and energy go to helping AIDS orphans?).

For a moment, I let go of my usual practical mindset and glimpsed the joy of our creator when he watches his people.  Creation isn't comprised only of stars and trees and rivers.  It is also everything we add to it with our minds and hands and hearts: our work, our play, our praise.

I won’t try to convince you that washing dishes is holy.  It may be, but I’m afraid if I begin to argue that point I’ll find myself typing out bitter phrases like unending cycle of futility.  It is summer, after all.  My kids are at home and eating all day long, and I loaded and unloaded my dishwasher four times yesterday.  I think some bitterness is understandable.

Still, I’ve begun to think that we sometimes needlessly complicate our lives by insisting on purpose and meaningfulness in all that we do.  Surely that can lead to a whole lot of dissatisfaction.  For the born-evangelist who spends his days trying to build a small business.  For the one called to be a teacher who must spend more time mopping floors than instructing.  And for me, who has a paper on the wall that says PhD but picks up stacks of academic journals only because the youngest needs a booster seat.

I’m sorry, but washing dishes will never seem meaningful to me, and yet, I think I can begin to understand how even this menial work contributes to some bigger, some more glorious creation.  From the perspective of vast, unexplored space, the effort of this space shuttle flight also appears very, very small.  Inconsequential, even.  And it may be exactly that.  But I don’t think we should measure our work by the weight of it or by its duration.  There is a perspective that says the just-cooked meal and the space shuttle’s flight are both a blink of an eye.

I think we can take our cue from the mind of the maker.  The one who made redwoods that live thousands of years is the same one who makes mayflies.  He has given his effort to both.  He isn’t a God who sifts his creation into worthy and unworthy, like a man sifting gold from rock.  He’s a God who delights in more, more, more.  Especially the small more of our own contribution.

“How many are your works, O Lord!  In wisdom you made them all; the earth is full of your creatures.”