Book of Quotations: This Story is My Home 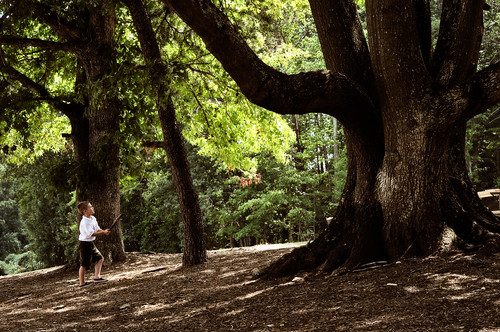 I love this photograph so much. It’s only a picture of my nephew and his stick at the edge of some woods. I think it is one of those pictures that reveals so much more than the sum of its parts: boy, stick, tree.

I look at this picture, and I see fairy tales. Knights with swords as alive as they are. Wickedness that must be sought out in dark forests. I see adventure stories. Those stories that make sleeping on a bed of leaves and cooking food over an open flame sound like heaven.

This photograph reminds me of all that I love about the very best stories: magic, beauty, goodness. Also, darkness, evil, confusion, until, finally, triumph and victory.

I think that I am a Christian because I believe these stories tell me something true about the world. They also tell me true things about myself and about other people.

In Still: Notes on a Mid-Faith Crisis, Lauren Winner shares her friend Julian’s memory of being confirmed as a twelve-year-old. A few days before the service, he panicked and told his father (who was also the minister) that he didn’t know if he believed all the right things and wondered if he could proclaim in front of the church that he was ready to believe them forever. Here is his father’s response:

Sometimes, faith is like a wrestling match. Like Jacob wrestling all through the dark night with God himself. Jacob always bore the scar of that struggle.

Sometimes, faith is like coming home. Abiding in a place that reveals something of who we truly are.

To have faith is to say, “This is the place where I live.”

Jesus said, “Live in me. Make your home in me just as I do in you.”