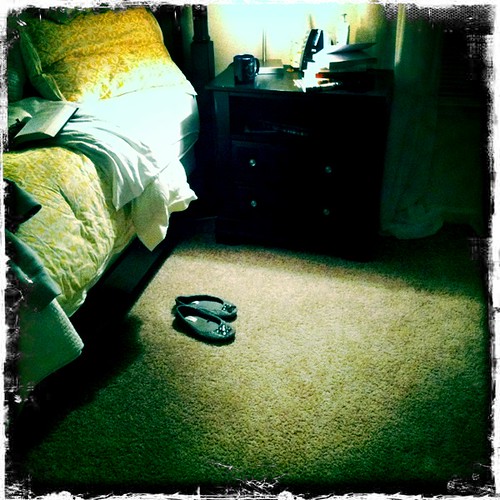 When my life is in waiting mode, I sometimes wish I could go to bed and just sleep for a few months. Oblivion seems so much more appealing than the hard, day-to-day of waiting.

Waiting is painful, and it often feels pointless too. So much so, that I fantasize about hitting some kind of cosmic fast-forward button.

The firstborn feels it too. For weeks now she’s been murmuring the same refrain: “I wish that today was Christmas Eve!” From my grown-up perspective, I can clearly see that she, in her impatience, is wishing for the lesser. The not quite-as-good.

I always tell her, “No! You don’t want that. It would mean that Christmas is almost over.”

What I’m trying to say, but can never quite convince her of, is that Christmas will certainly come, so why wish away all of the good that happens in the meantime? The daily Advent calendar, the classroom parties, the cookie baking. It may not be what we’re waiting for, but it is good nonetheless. And Christmas will come. Speeding it up doesn’t make it any more of a sure thing.

Other times, waiting is less enjoyable. That’s when I fantasize about becoming a modern-day Rip Van Winkle. God, just wake me up when it’s all over. Wake me up when it gets good.

This is when age comes in handy. It’s good to no longer be eight years old. Because I can remember.

I can remember the painful waiting of our first few married years. All we wanted was to leave Texas and live in a big city. We had exciting dreams but felt painfully cramped by our current circumstances. An uninspiring white box of an apartment. The heat and humidity of a Texas river valley. The fact that we couldn’t go anywhere unless we started up the car.

Moving to Chicago was a dream fulfilled, and the magic of it never really wore off. I could still feel it even ten years later. There was our corner apartment in a converted jazz-age luxury hotel. Our windows were at tree-top height, and the views included the lake and the museum’s grand front lawn. There were the honey locust trees that gave every neighborhood street a golden canopy each October. There was a downtown skyline that glittered, and a lake that sometimes looked like a wind-swept arctic wilderness. And there was snow! But best of all, we could walk everywhere.

I could hardly step outside my door without being grateful that God had brought us to this place. I would often marvel to myself that this – this! – is what he’d had in mind all those years of our waiting. The friends. The church. The old, ivy-covered buildings. The bookstores like underground caves stuffed full of treasure. It was good, but it was made even better because we had longed for it before we ever even knew exactly where it could be found.

I remember these things and know that it is precisely the discomfort of waiting that urges us forward into the plans God has prepared for us. The people. The places. We long for them before we even know their names. But this is good and necessary. Because when the things of God are finally revealed in our lives … we recognize them. We know them. And we know exactly who to thank.

“Many, O Lord my God, are the wonders you have done. The things you planned for us no one can recount to you; were I to speak and tell of them, they would be too many to declare.”